How Does PPN Work?

How Do I Join PPN?

The Kilkenny Public Participation Network (PPN) is the new structure and platform on which the local community can engage with the Kilkenny County Council. It forms the link between the Voluntary & Community, Social Inclusion and Environmental sectors and the local governing body.

Established in 2014 through the Local Government Reform Act 2014,  the PPN ensures that the public can have their say on local government decisions.

How does PPN Work?

The PPN has a ” flat structure” not a hierarchical one meaning there is no one leader making final decisions but  instead each group represented has an equal voice and opportunity to make decisions and to be heard and they do this during the Plenary meetings.

Representatives are elected by PPN members to sit on committees and are supported by linkage or working groups to carry out their role.

Plenary, meaning all member groups together. This is the main decision making body of the PPN. A plenary meeting is convened twice a year to discuss issues and vote on policies and procedures. Each member group has one vote at a plenary.

The Secretariat are the administration group of the PPN overseeing the running of it. The secretariat  consists of about 10 members which are independent of the county council and are elected by the PPN.

Linkage groups or working groups, form around a particular issue to support the representative in their role on a committee.

The Co-Ordinator is the administrator of the PPN  and is responsible for the development of the PPN . He/she is directed by the secretariat. 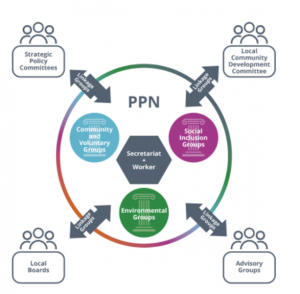 How do I join PPN?

Membership of the PPN is open to ALL community & voluntary groups within Kilkenny which meet the following criteria:

Examples of the types of Groups