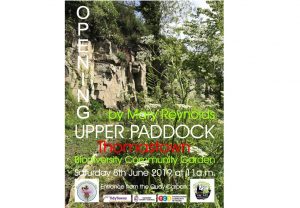 The opening of the garden is a culmination of an almost decade long project, which started in 2011, when the land was leased by Thomastown TidyTowns from the Kilkenny County Council for a 10 year period, at a cost of €10 per year. The work started with the original gate being repaired and erected, a stairway was then constructed from the Car Park to the gate with a pathway with log risers up to the Upper Paddock. The entrance with new planters had to be rebuilt after a tree fell after a storm. Finally, the ‘Great Wall’ was rebuilt across the whole front facing the Quay Carpark and the top garden fenced.

Mary Reynolds, Nature Activist and Reformed Landscape Designer was commissioned to a design a Community Garden for Thomastown.

Over the last few years, a small group of volunteers, the Community Employees and the 2 Hour Gang from Thomastown Community Network TidyTowns with help from the Mens’ Shed, have implemented the Garden design.

The project has been funded over the years by Amenity Grants from Kilkenny County Council and from fundraising work by the Community.

The project forms part of the :

Re-Wilding project called ’We are the Ark’
www.wearetheark.org